This year Litmus and Hubspot combined some data together to release a report entitled “Science of Email 2014.” The best part of this report is how it contrasted self reported data against observational data. One of these finding specifically spoke to the number of images in an email and the effect that has on click-through rate.

When users were asked (in both 2011 and 2014 surveys) if they preferred marketing emails that were mostly image or text nearly 2/3 responded saying they preferred image-based emails.

However, when you look at the core data, the more images included in an email campaign the lower the overall CTR became as shown by the graph from the report. 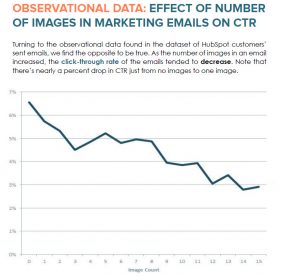 There was a lot of other great information in the report. I would encourage you to obtain a copy (not just because we published the above image without their permission and suggesting you get a copy somehow makes us feel better about it) so you can also get some intel about image size, changing attitudes toward email, demographics, timing, and much more.

–>Hubspot Blog About the Report

View all posts by MyEmailProgram Admin →